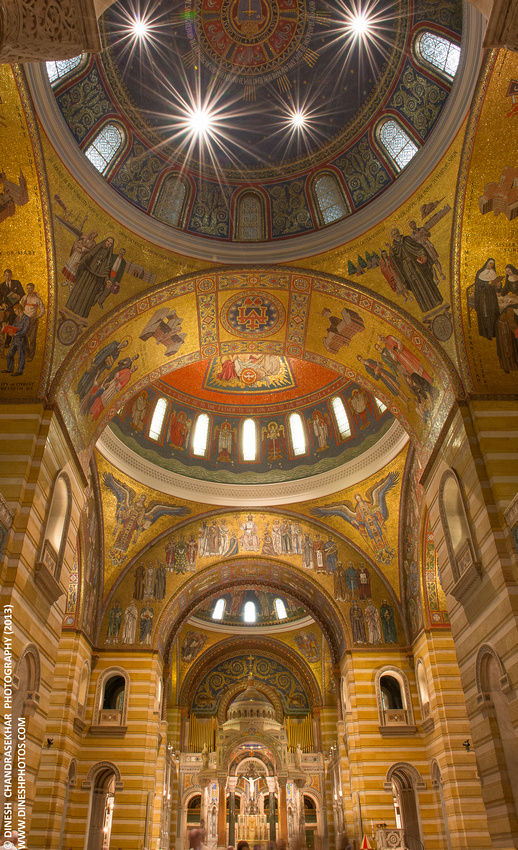 Never did I imagine that my first post on this blog would be about a "fast and happening" place like St. Louis, MO. :-) But, hey, it is a start. Last week, I had a chance to go out to St. Louis, MO for work. As is routine, I checked out the place on TripAdvisor, Yelp and other such sites to find what is good to see out there and where to eat. Seemed like there were a quite a few places to actually spend some quality time. So, I packed my gear - camera, lenses, filters, tripod and all.

The city itself was very slow. For a place where most of the drivers do not go beyond 55 mph, it had its share of traffic jams. With just 2-3 lanes to major highways, it was difficult to get around during weekday evenings. The one place that I really wanted to visit was the Cathedral Basilica of St. Louis. This was touted as one of the largest cathedrals outside of Europe. The church itself is 100 years old. The highlight of the interiors was that it housed mural art designed with 41.5 million pieces of mosaic tiles!! The internet pictures looked amazing and I was very excited about putting my new Gitzo/RRS combo to work.

I reached the Cathedral Saturday morning around 10 am. As I was shooting pictures of the exterior, the church Father noticed me and said that the service was just getting over and that I could get in from the front and can take pictures. So, I walked around the building and got to the front of the church. I pulled the huge doors open and as soon as I walked inside, I just gasped. The imposingly high ceilings decorated with intricate mosaic artwork just took my breath away. The first thought that crossed my mind was - "Crap! I need a wider lens".

There were very few people left in the church. There was already a photog at work at the very entrance. Peeked at his gear - Canon with a 16-35 lens. I complimented on his good lens selection. Soon, we were conversing comfortably about good settings to use in that light. We were critiquing his shots too. With absolutely no introductions to each other, it still felt like we already knew each other so well. Photogs rock! As my new found friend moved to a different spot,  I setup shop and started experimenting with my shots.

That place is a goldmine for photogs but one needs to figure out the right time to shoot since they switch off the key focus lights after the service is over. If you are thinking that you should shoot before a service starts, factor in the throngs of people that will keep walking in and out of your shots. Your long exposure shots are going to be a challenge with that. Positioning your tripod at a good place will also be difficult. Also, they start closing off some of the areas around the main shrine before a service starts.

Anyway, I made the best use of my time while I was there. Since I was just on my own, I spent a good 3.5 hours out there. The next service was starting up and so, I had to wrap up. Saturday churchgoers looked like they were attending an Oscars red carpet ceremony. Everyone looked like they were there to do portraits. When I left that place, I went directly to a restaurant since I was famished!

Picture in this post: This was one of the very last pictures that I took while I was there. The service was about to start and so, people were everywhere. You can see some motion blur of the people at the bottom of the picture. I cropped out most of it. Just left a little bit to show scale of the place. What I liked about this specific shot was the starburst at the top. Those lights had just been switched on for the service. There are some other Pano and bracketed shots that I took as well. I will process them later and publish them. Until then, enjoy this picture. At its max resolution (not posted here), you can see an amazing amount of detail on the art on those walls.

Until next time, adios!