First, wish you all a very healthy, happy and peaceful new year!! I hope you had a great 2015. 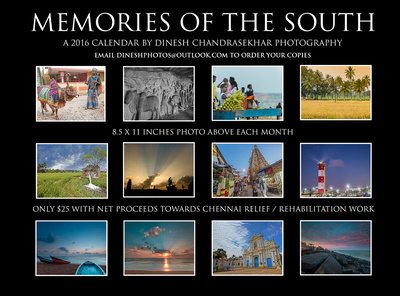 As you may have heard/seen by now, Chennai (India), was affected by intense rains and flooding in December 2015. As a result of that, hundreds of lives were lost and many people lost their homes and livelihoods. Even though the flood waters have subsided, the property loss has been staggering. As Chennai is getting rehabilitated, a lot of us have volunteered to help out Chennai in whatever way possible - physically or fiscally. So, in my own small way, I decided to put out a 2016 calendar filled with my photographs of Chennai and other places in the south. I decided to aptly call it "Memories of the South". The calendar cost was set at $25 and the net proceeds from it were going towards rebuilding Chennai. The response from my friends, supporters and page patrons was truly overwhelming. I was only hoping to sell 50 calendars but ended up selling 80 calendars. At the end of the day, with your help, I was able to donate $1150 to "Help Chennai get back on its feet", a local non-profit group that is distributing the funds to several NGOs (in Chennai) that are actively involved in rebuilding Chennai. So, thank you, thank you, thank you!!

Even though the calendar was largely appreciated by those who bought it, the most common feedback that I got back was that they wished that each of the pictures had captions on them to explain where each photo was taken. Trust me! I really wanted to do it but the vendor that printed this could add a caption only when the picture was resized to a smaller size. :-( I was not willing to accept a smaller size for the pictures. So, I left it in as is. This post is to document each of the pictures and tell you a bit more about each of those clicks. Hope you enjoy it.

January 2016 - Kapaleeshwarar Temple, Mylapore, Chennai
It is a historic temple, whose history dates even older than that of Chennai. Even though Chennai is home to hundreds of temples, churches and mosques, this one has a special place in the hearts of Chennai residents. It still retains the old flavor of Madras, idolizes the faith of millions and symbolizes the traditional roots of the metropolis. The flower vendors near the temple, the smell of agarbathis (incense sticks), bhajans and classical numbers echoing off the walls of various music stores there and the bright display of silk sarees at RaSi (a famous silk saree store) just sweep you off your feet into a different world. This was a handheld shot taken at dusk. 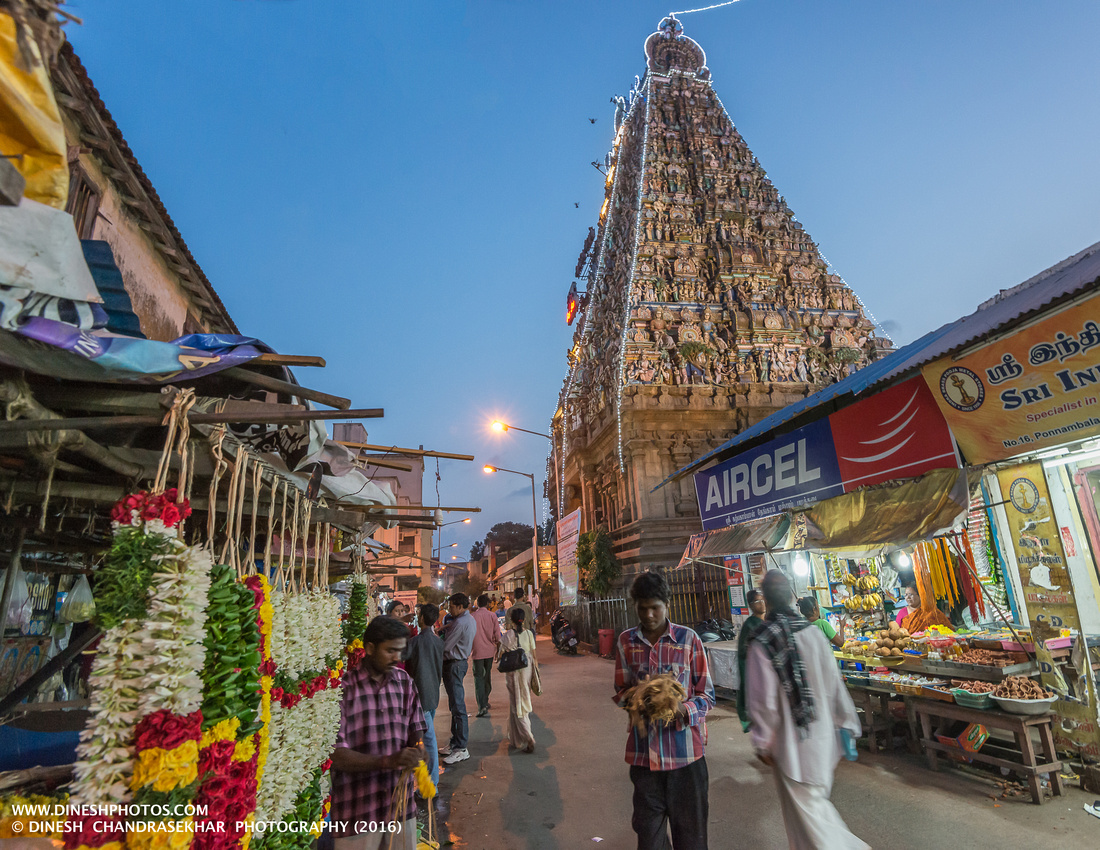 February 2016 - Harvest fields, Near Mayiladuthurai, Tamil Nadu
Tamil Nadu, the southern state to which Chennai is the capital, is filled with rice paddy fields. Mid-January is when the harvest season starts for the farmers in this region. Took this shot around early January and you can see the almost-ready golden harvest color of the fields. My friend and I were driving through the south and we came across these fields. I got out of the car and took this shot from the side of the road. I loved the contrast of the golden yellow in the front to the green fields in the back. 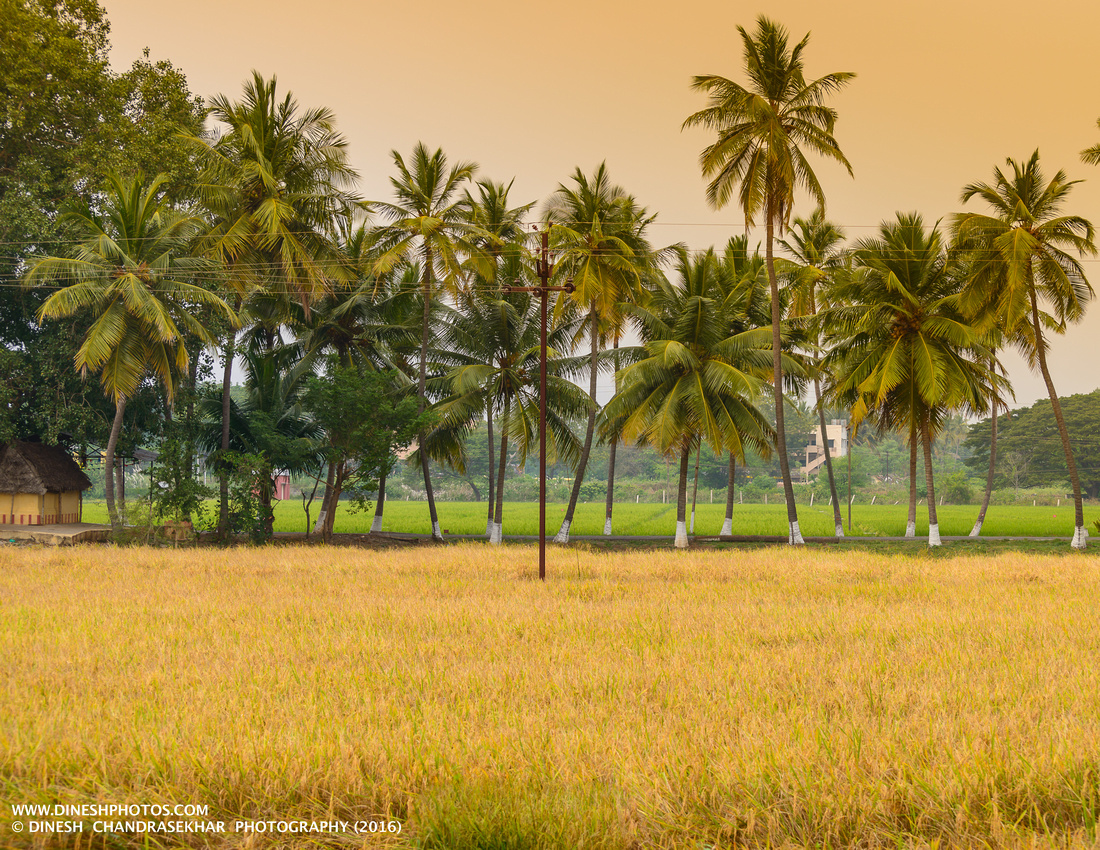 March 2016 - Sunset at the Pondicherry Beach
​Pondicherry (or Puducherry) is a coastal union territory town in the south. Due to its French colonization past, the town still retains a lot of the French architecture, colors, culture and flavor. Even though called a beach, the town has a very rocky shore for the most part. Since the town is on the eastern side of the country, the sun sets not in the sea but rather on the other side - behind the town. But, on this particular evening, the sky lit up with blazing colors after the sun had set. I took this shot with a long exposure, soaking in the colors as well as the spray from the waves crashing against the rocks. The long exposure gave the sea a smooth, silky effect but trust me when I say that I had to wipe my gear so carefully to get all the salt spray off it. Enjoyed a nice mango-peanut (maanga sundal) snack after this. 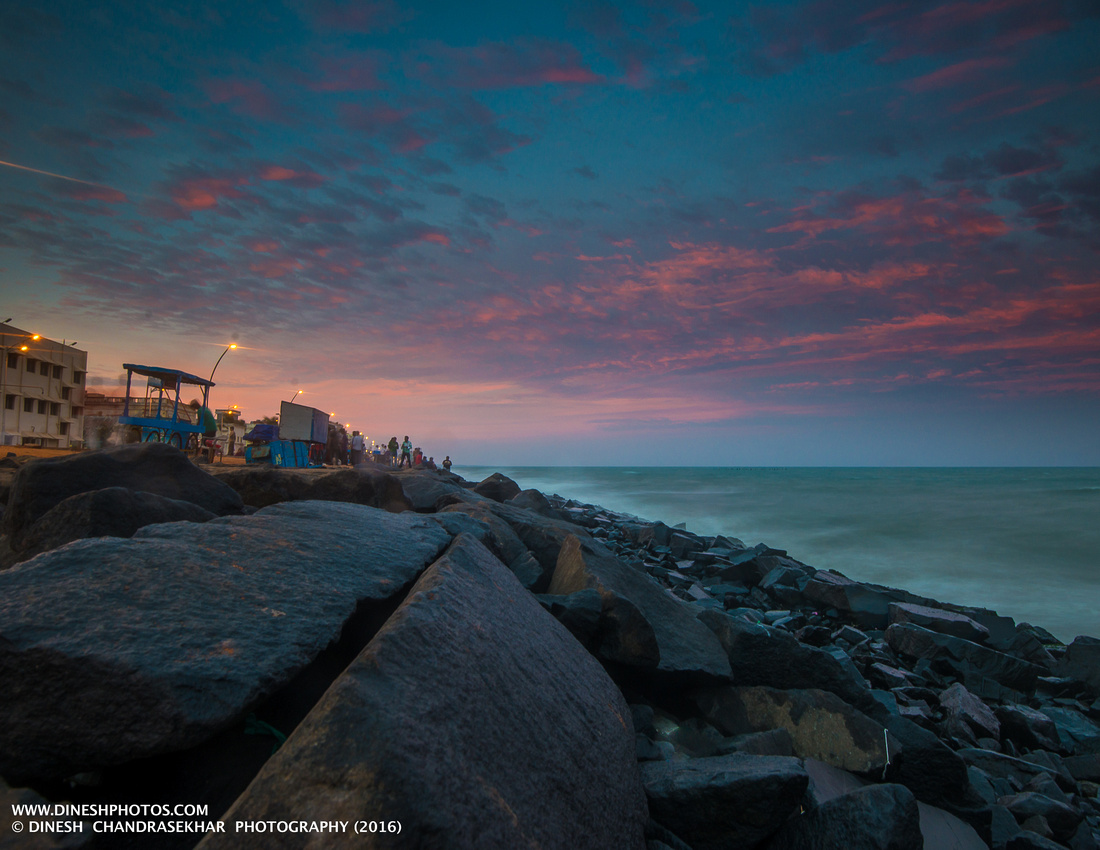 One of my friends is into agriculture as a passionate hobby. He drives down from Chennai every weekend to his ancestral place called Kurungulam in Tamil Nadu, so that he can take care of the fields over there. On one of those trips, I accompanied him to experience the outdoors. We took a walk through a rice paddy field in that village. The experience of walking barefoot on those fields is something I will never forget. The little building that you see in this picture is a "pumpset" - an enclosure to house the electric pump that pumps water to the fields around there through the various irrigated paths. If you look at the front of the picture, you can even see the golden kernels of rice on those crops. 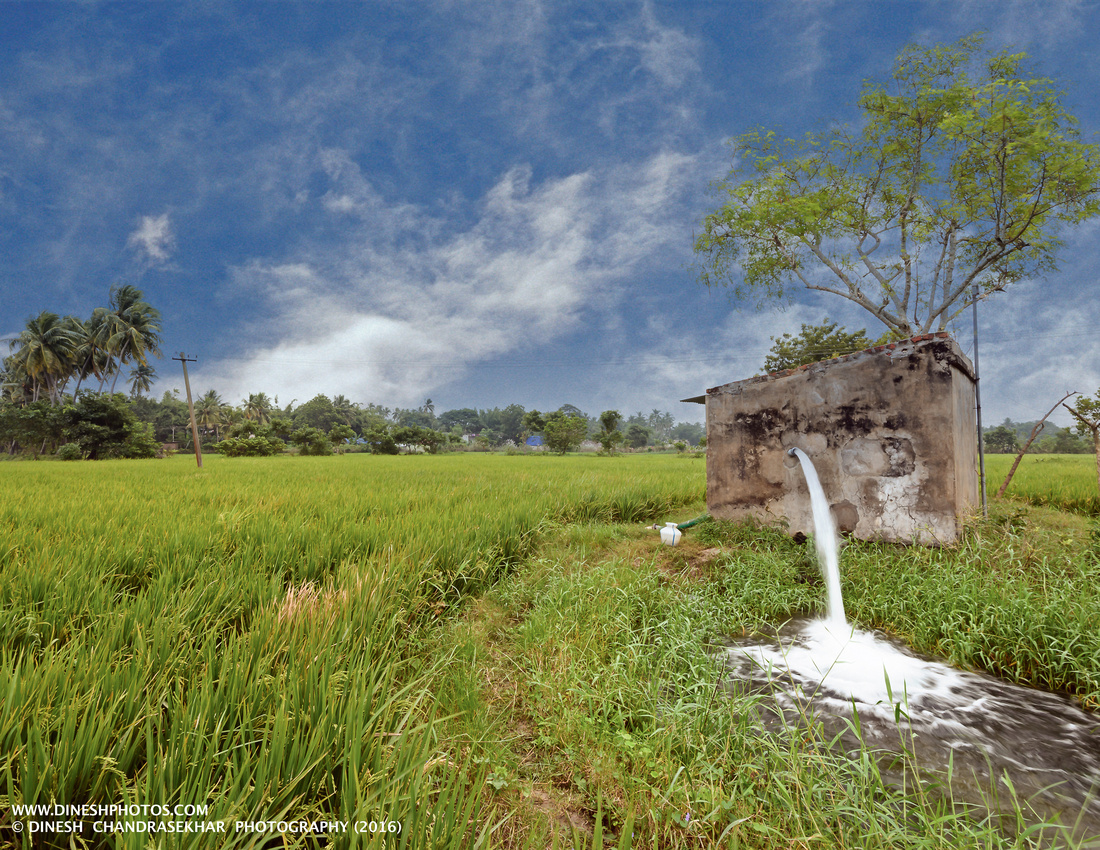 I don't even know what the actual translation of that word could be in English but in Tamil, this guy is called a "Boomboom maatukaaran". He is more like "The traveling bull showman". He decks up his bull with colorful clothes and bells and walks around to each house in the neighborhood, telling them of fortunes that the house owner is bound to get in the coming days. He also makes the bull perform "tricks" like making it answer to his questions. The bull would respond with a wild shake of its head, jiggling all its bells. This would send the small children into wild laughter. He can also make the bull to lift its leg and do such simple tricks. The house owner then may give him some money for the "entertainment" and the "fortune-telling". This used to be so common a few decades ago but I was surprised to find this guy walk our streets in recent times. I was thrilled to capture him and his bull in "action". :-) 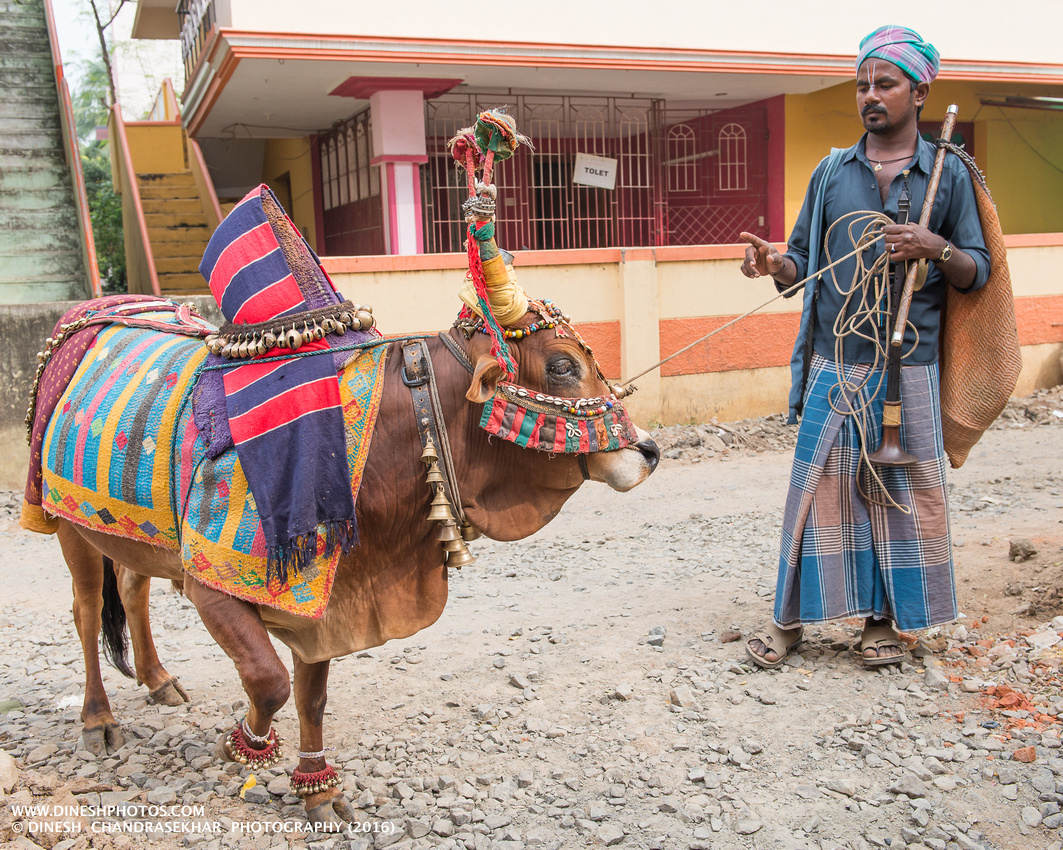 I have grown up in Chennai and lived there for 24 years of my life. But, never once, have I inspired myself to go to the beach and watch the spectacular sunrise that most of the Madras residents would know. Yes, there are probably quite a few like me too. But, two years back, when I visited Chennai, I wanted to experience that sunrise and of course, photograph it! So, one early morning, my dad drove me over to the Marina beach in the wee hours when even the stray dogs were tired and sleeping. My mom, who came with us, was very leery of those dogs and carefully dodged around them. Any other town in the world, I would have felt a bit unsafe and scared. But, not in my hometown. We saw some boats that were parked on the sandy beach. I setup my camera gear on a gorilla tripod and latched it onto one of the boats there. When the sun came up, more than taking several beautiful pictures of it, the sheer immersive experience that I had that morning was something I will never forget my entire life. Such a sight to behold and admire! 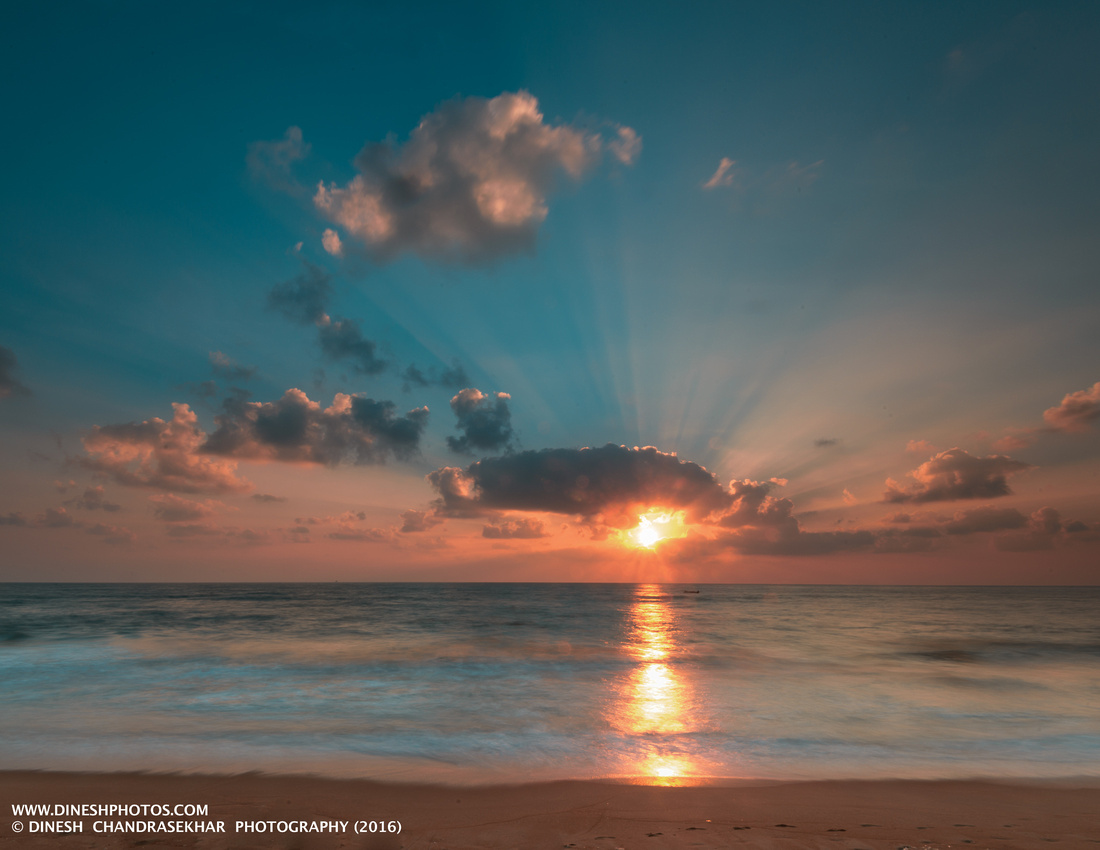 One of the finest incentives of visiting the Marina beach in Chennai is not just the beach itself - it is the awesome street food that you get to eat there. You have a wide range of mouth-watering treats from sliced mangoes rubbed with paprika powder to fried chilli bajjis. One such food that you will find there is freshly roasted corn. I saw this girl roasting the corn on a windy evening and the sparks from her stove were flying away in the wind. I decided to slow down the shutter a tad and take the shot and made this cool shot. In this picture, I can smell the sea breeze mixed with hot corn off the fire. 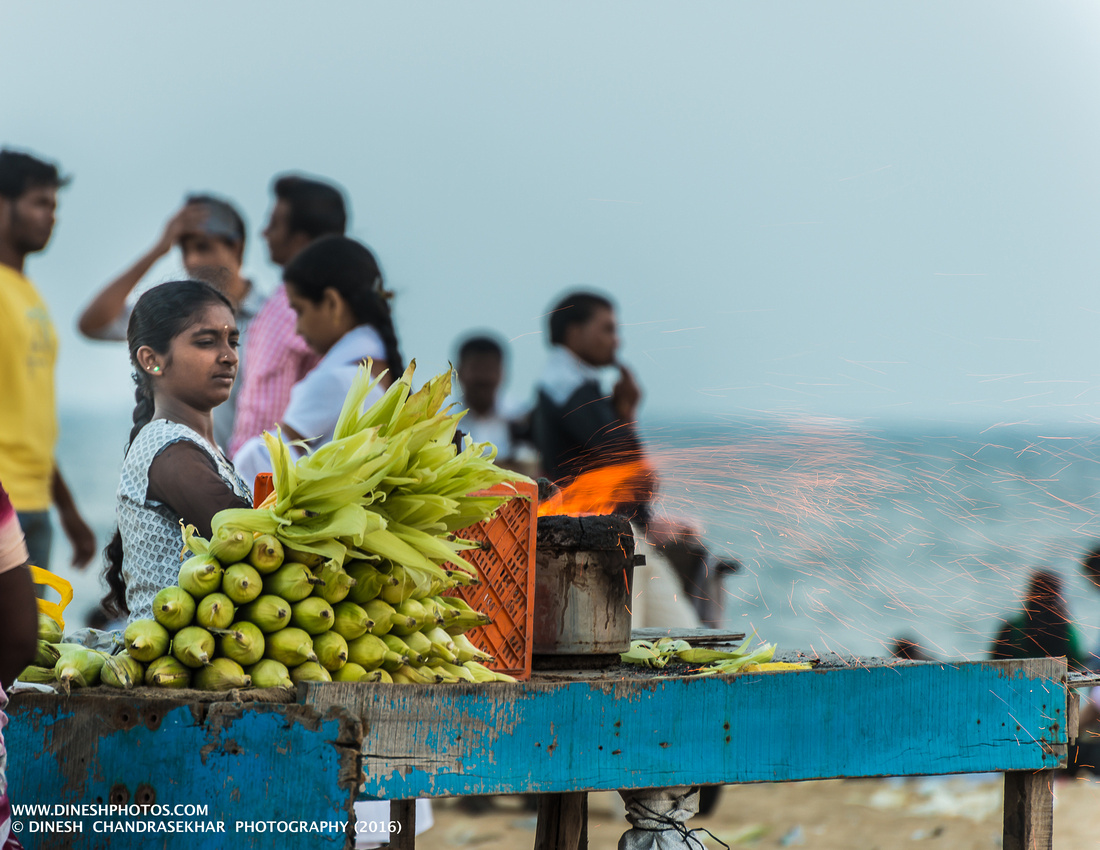 Mahabalipuram, also known as Mamallapuram or Mahabs as the city-dwellers call it, is a city a little south of Chennai. The city is home to scores of rock sculptures dating back to the 7th and 8th centuries. Classified as a UNESCO world heritage site, the city attracts a lot of tourism from across the country and the world. This is just a sample of the sculptures carved on a single wall of rock. As you walk through these various art pieces, you can even find some sculptors working on some amazing stone works. I loved the B&W format of this picture since I thought it brought out the true colors and flavor or those rocks. 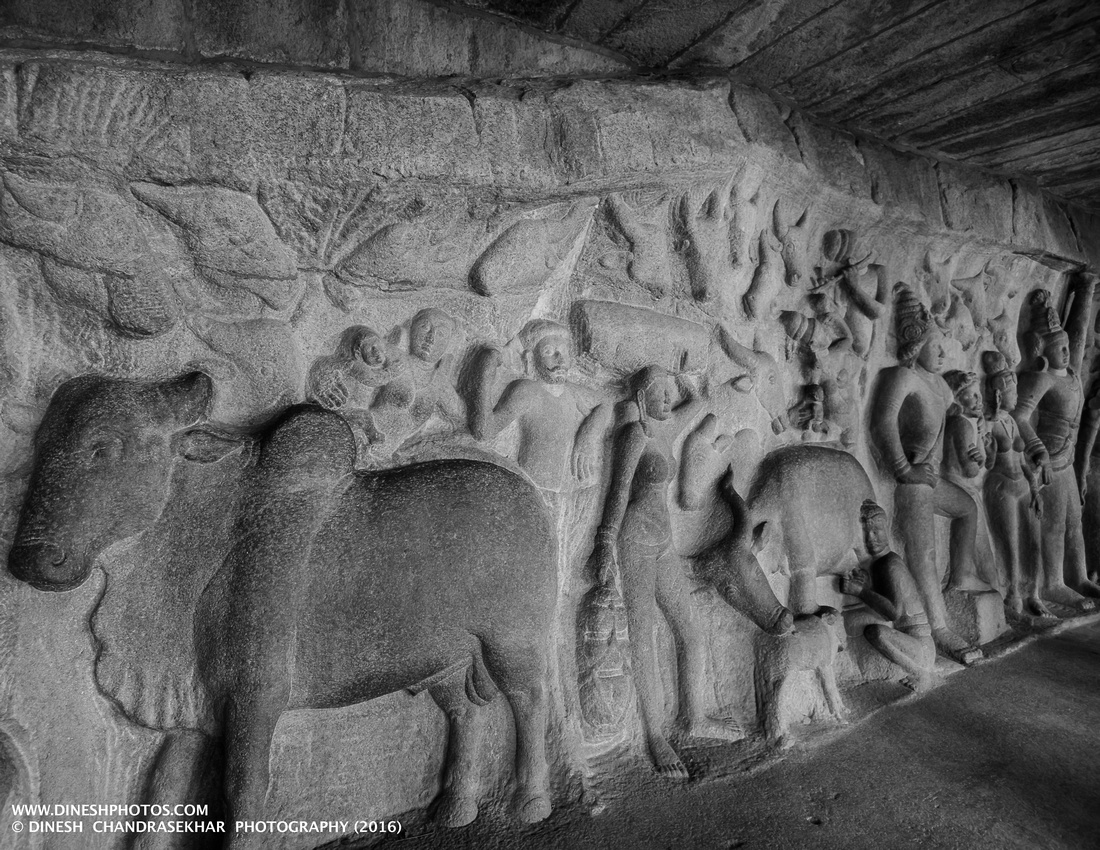 This not-so-attractive yet dominating building is the lighthouse situated on the Marina Beach in Chennai. It is prominently featured on every single Marina Beach picture that is published. I wanted to do something different. So, when I went out to take that early morning sunrise shot, I took this shot of the lighthouse in those wee hours of the morning. The tone and the color of the picture gave it a totally different look than the traditional Marina Beach lighthouse pic. 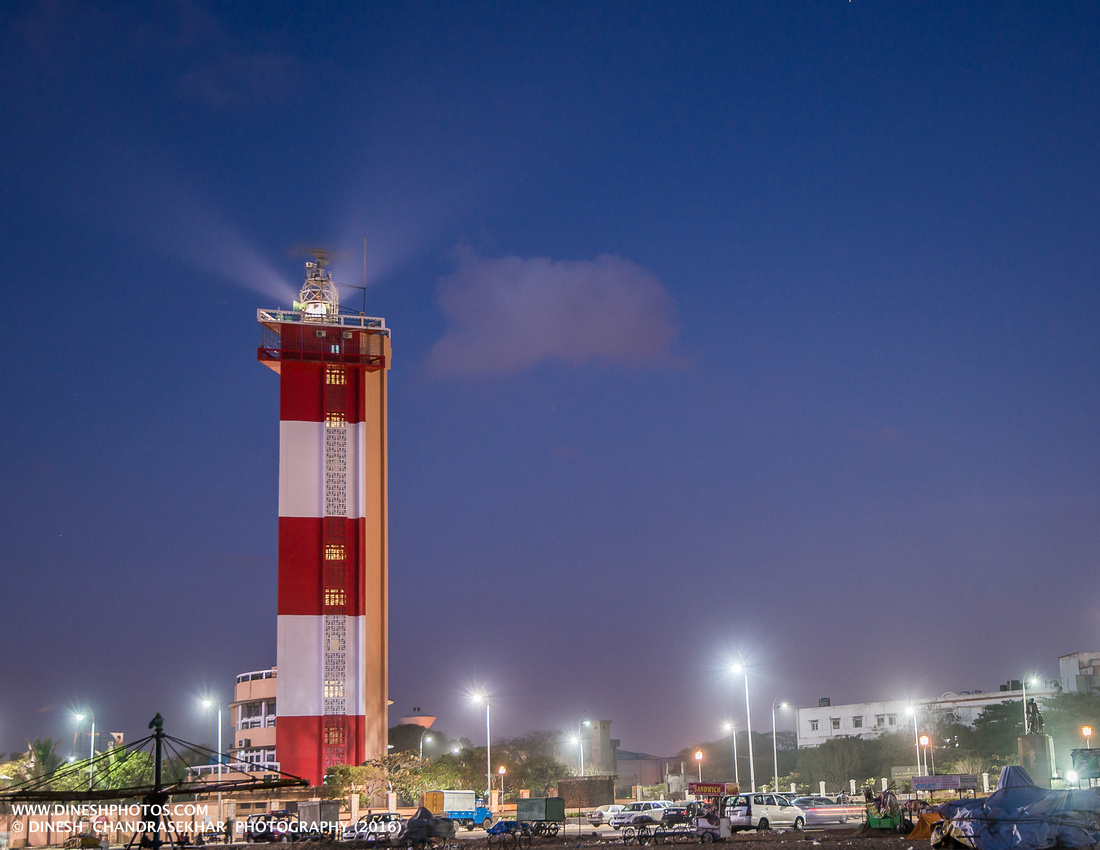 The Marina beach road in Chennai is adorned, across its entire stretch, with various statues of famous leaders. One of the most prominent statues is that of Mahatma Gandhi. On one of the evenings, when I was driving on this road with my father, I noticed that the sunset behind the clouds over the city was producing some splendid rays. I, immediately, jumped out of the car and raced across the road to get to a good vantage point to frame my shot before the rays faded away with the sunset. As much as I wished I could get the rays behind the Gandhi statue, I quite couldn't get it due to some obstructions in the pathway. But, I was still quite happy with the way it came out. Literally seconds after taking this shot, the effect faded away. :-) 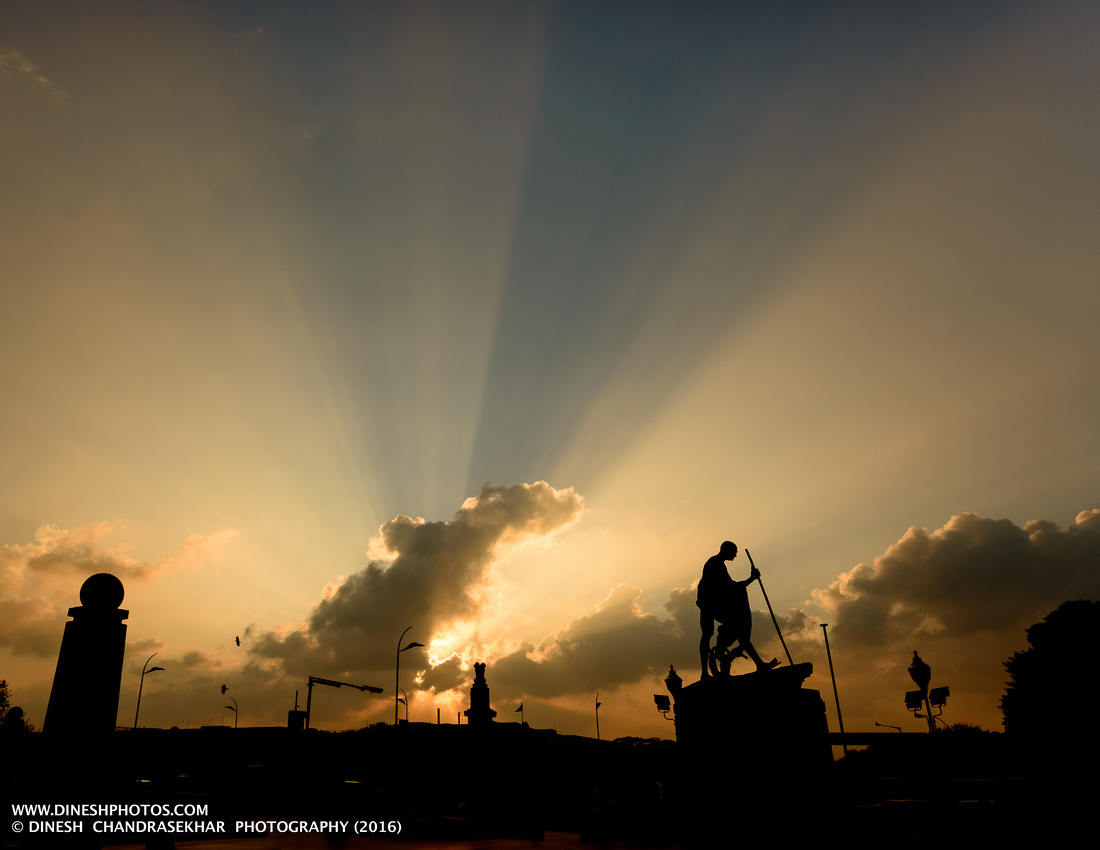 This shot was taken a few minutes before the actual sunrise happened at the beach. The boats provided such a good cover for the pastel colors in the background. The horizon started changing colors and the long exposure brought out some nice effects on the picture and the details. The most interesting thing in this picture is that crow on the far left boat. It stayed up, looking at the horizon, just like me, waiting to admire the sunrise. I am disappointed about putting this picture in this calendar because I had to crop this picture quite a but to fit it into this calendar format. The actual picture is actually a lot more wider and shows the crow and more of the horizon as well. You can checkout the original picture under the landscapes section of my gallery on this website. 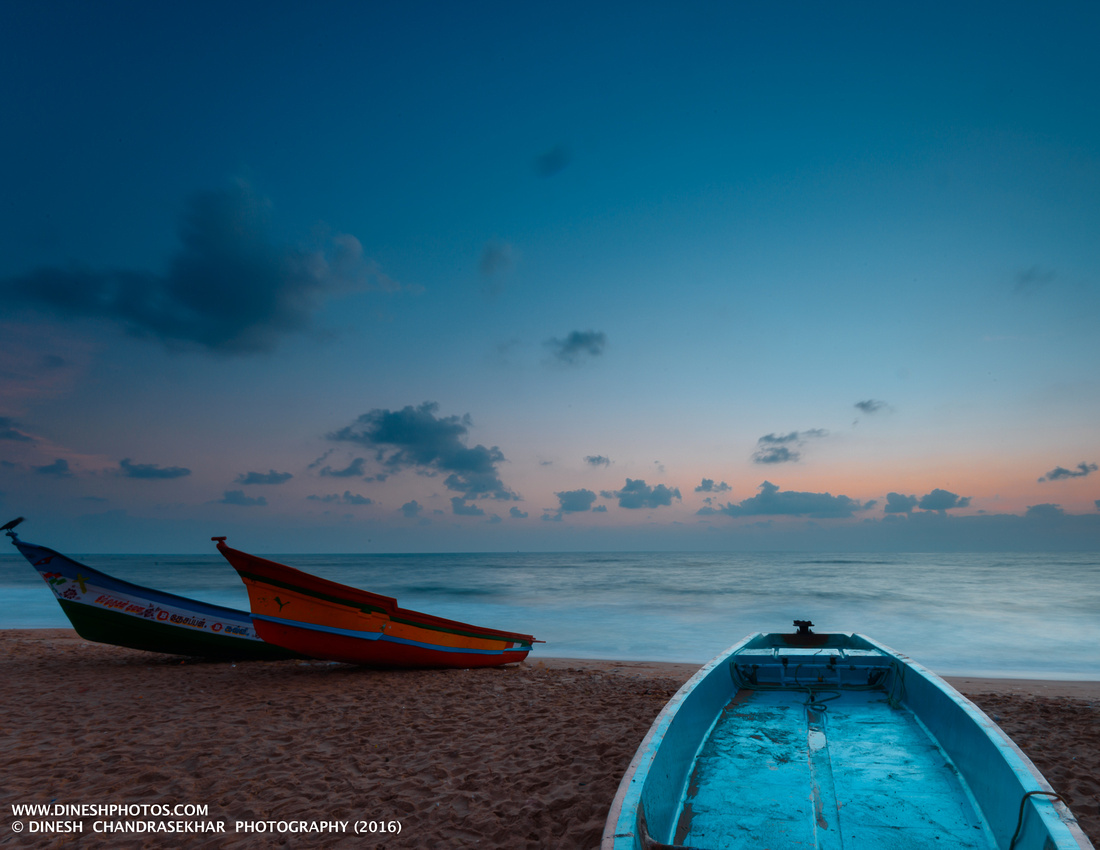 This is the "Immaculate Conception Cathedral" at Pondicherry (or Puducherry). The town is famous for its French churches built centuries ago. This is one such church with a lot of history behind it. I was passing by it and I just loved the way it looked. Moreover, the sky had such amazing clouds and light in the afternoon that I couldn't resist myself. Unfortunately, the church was closed at that time. I begged one of the gatekeepers there to let me in to the courtyard so that I can take the picture quickly and get out of there. After a few minutes, he allowed me. So, it was just me and the church. Took some time to compose the shot and bracketed it. 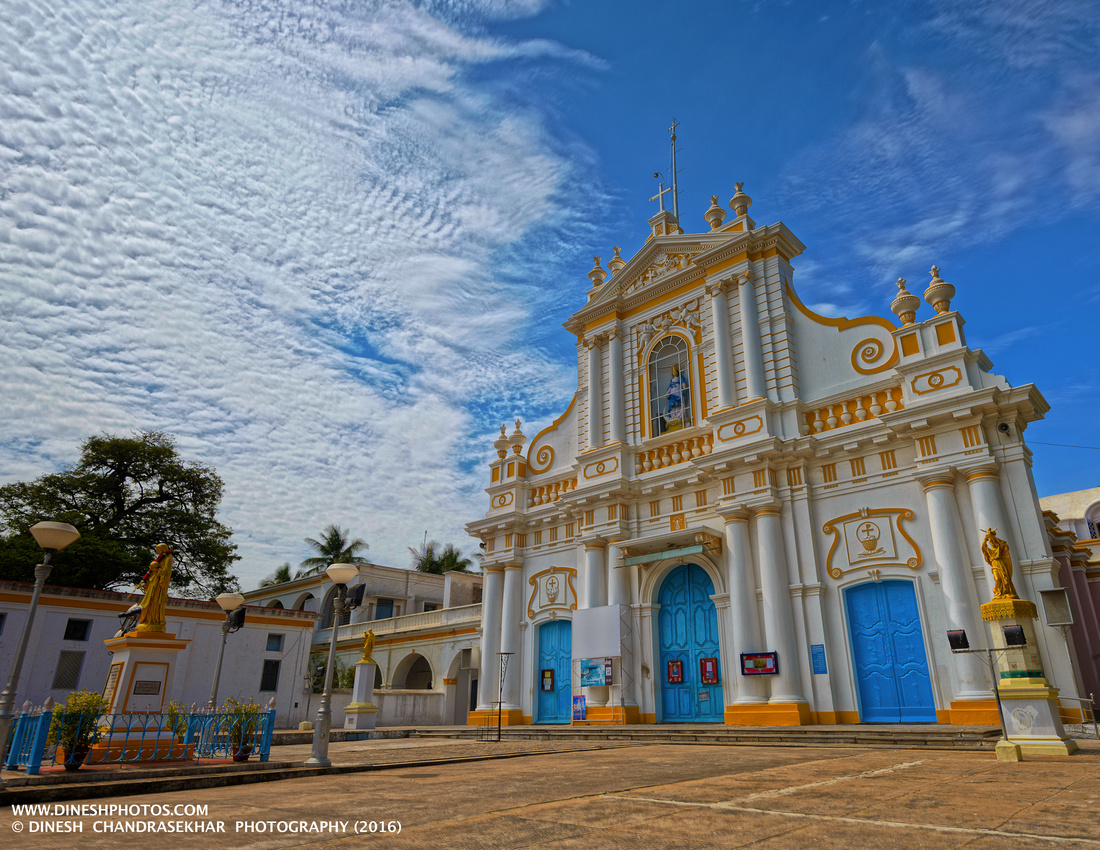