As I was browsing over some of my old photo albums, I was cringing at some of the pictures that I had taken with my old and faithful Olympus point-and-shoot film camera. They were a mere documentation of a trip or an event rather than a visual expression of what that scene meant to me at that time. But, I guess there wasn't much to be done with a P&S camera in those days. As I dusted off a 4x6 album from the bottom, I realized that it was from my trip to New York City during the last two weeks of 1999. Some of my friends thought it was spooky to be in a place like NYC when Y2K was about to go off on the 31st of Dec 1999. And, we all know how that Y2K story ended. :-)

I came upon this picture of the NYC skyline in the backdrop with the twin towers standing intimidatingly tall and with the Statue of Liberty in the foreground. With 9/11 being today, this picture struck a chord in me. I decided to enhance it so that it reflects the mood of what this day and that place has to come to represent today. So, first, I scanned the picture. Here is how it looked as I had scanned it. 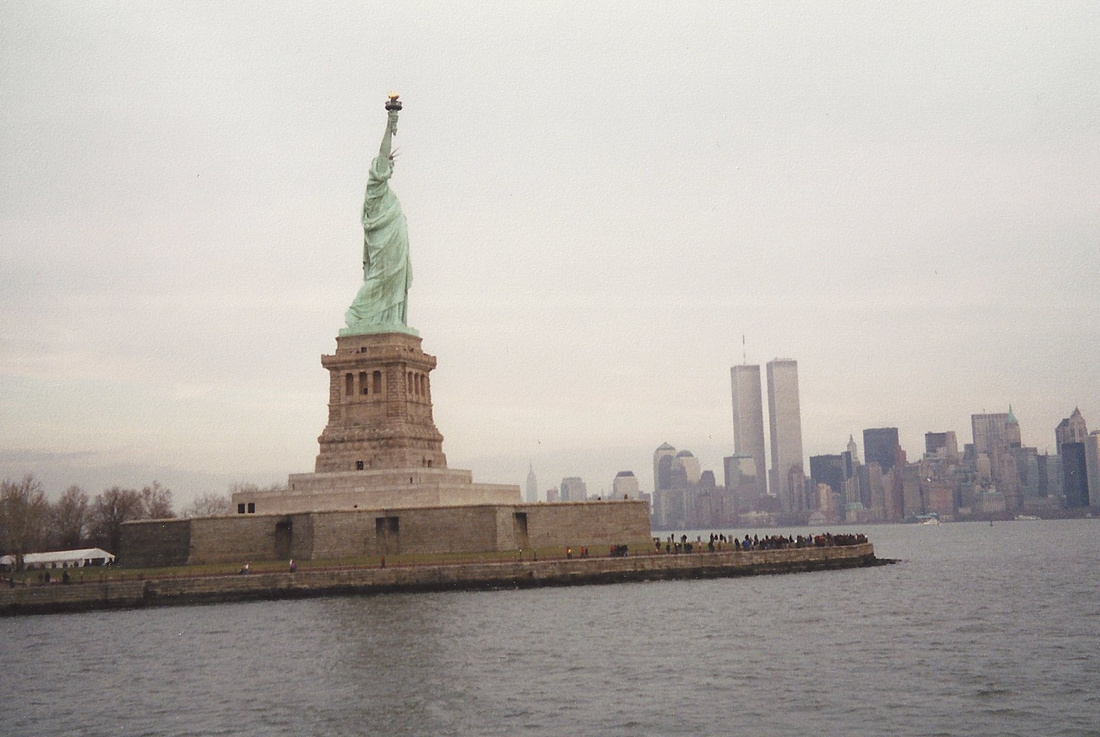 I had taken this picture from a boat that I had taken to visit lady liberty. As you can tell, the horizon in this picture was a little tilted. So, first order of business, I imported it into Lightroom and cropped the picture. I adjusted the tilt of the picture so that the horizon is straightened. Took a little bit off the sky, which mostly didn't have any character as that December in NYC was mostly very cold and gloomy. Next, I adjusted the color sliders a little bit so that the statue and the pedestal popped out a bit rather than appearing washed out. I sharpened the picture with a mask such that the outlines of the buildings and the statue were very crisp. This increased a lot of noise in the already grainy picture. Added some extra noise reduction but this took away the details from the buildings and also the shapes of the people near the statue. I was okay with it as it started to look like art. Next, I added a few gradients on the sky from three points to bring out the color and contrast so that it looked like twilight and gave the picture the required mood. Next, I used the Adjustment Brush and selected the water with the Auto Mask on. I brought down the Clarity and the Sharpness sliders. This gave a nice smooth effect to the water as though I had used a Vari-ND filter with long exposure. This is how it looked after all these adjustments. 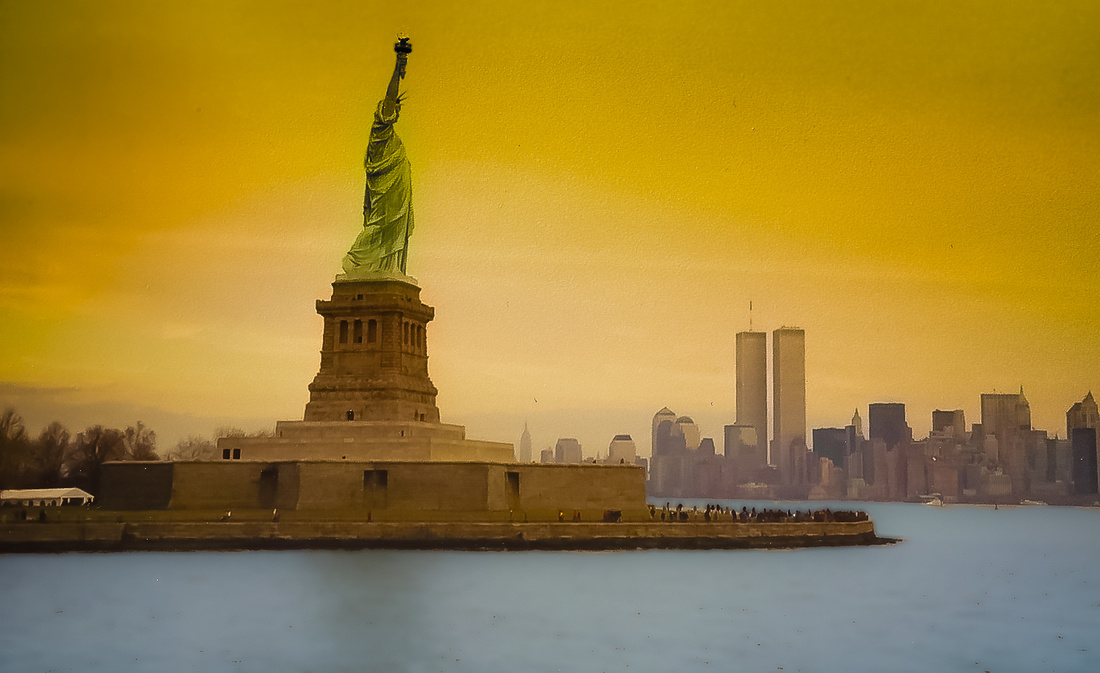 One of the cool things about Adobe Lightroom is that it integrates with other editing tools very nicely. One such tool that I use occasionally is onOne Perfect Effects. I right-clicked on this pic and chose Edit In -> Perfect Effects. I was able to see the same file within Perfect Effects with all the Lightroom adjustments I had made. I chose an effect called Rice Paper and applied some vignetting too. Once I saved the file in Perfect Effects, the updated file was immediately showing up in Lightroom. This is how it looked at that point - 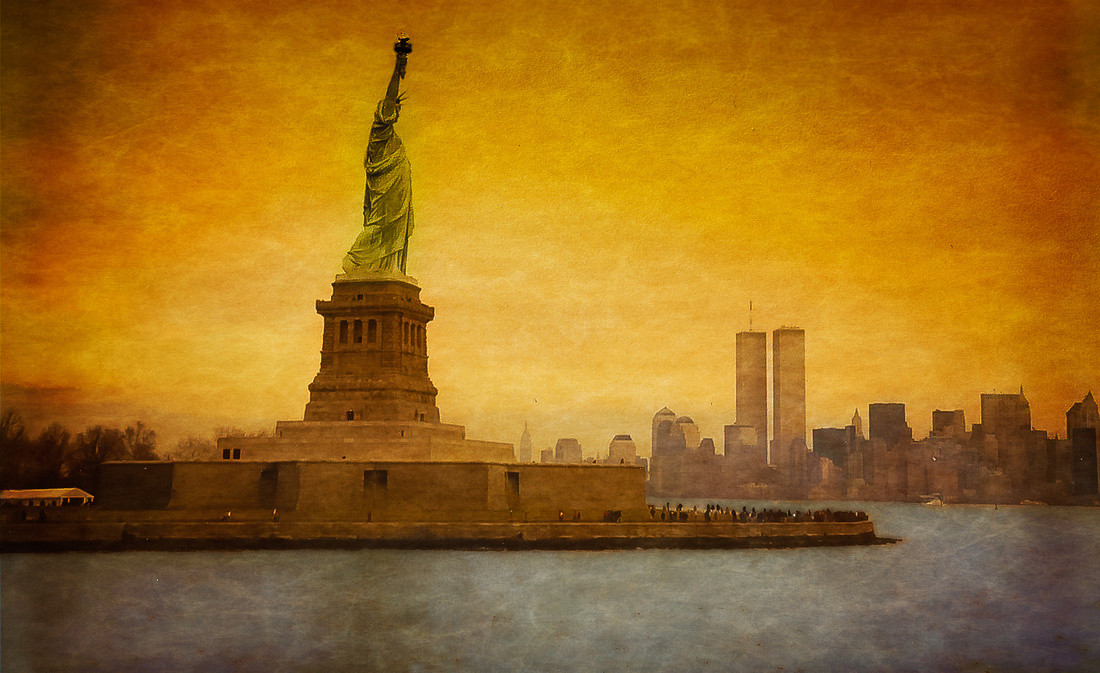 Next, I decided that the image required some text and the American flag to be weaved in somehow. I chose Photoshop as the ideal tool for that. So, again, I right-clicked on the most recent version of the file in LightRoom and selected Edit In -> Adobe Photoshop CS6. Within Photoshop, I added a layer for adding text. I tried a few fonts until I liked the one that you see in the final picture below. I also added another layer. Pasted an American flag image into the picture. I lowered the opacity of the layer to be 11% and the fill to be around 50%. Anything higher than this put the focus on the flag than the core image. I didn't want that. I also resized the layer image in such a way that the flag was aligned from the top of the sky up to the top of the waterline. I did this because I liked the texture of the water as it is. The flag overlay was messing up with the texture. Anyway, after a few brightness and saturation adjustments, I was happy with it. I saved the image and went back to Lightroom to see the final image. Here, I could have again adjusted the noise reduction to bring down the grains. But, I decided that I wanted the grungy, grainy feel to it. Just added a border to add a final touch. Here is the final picture. Hope you like it. 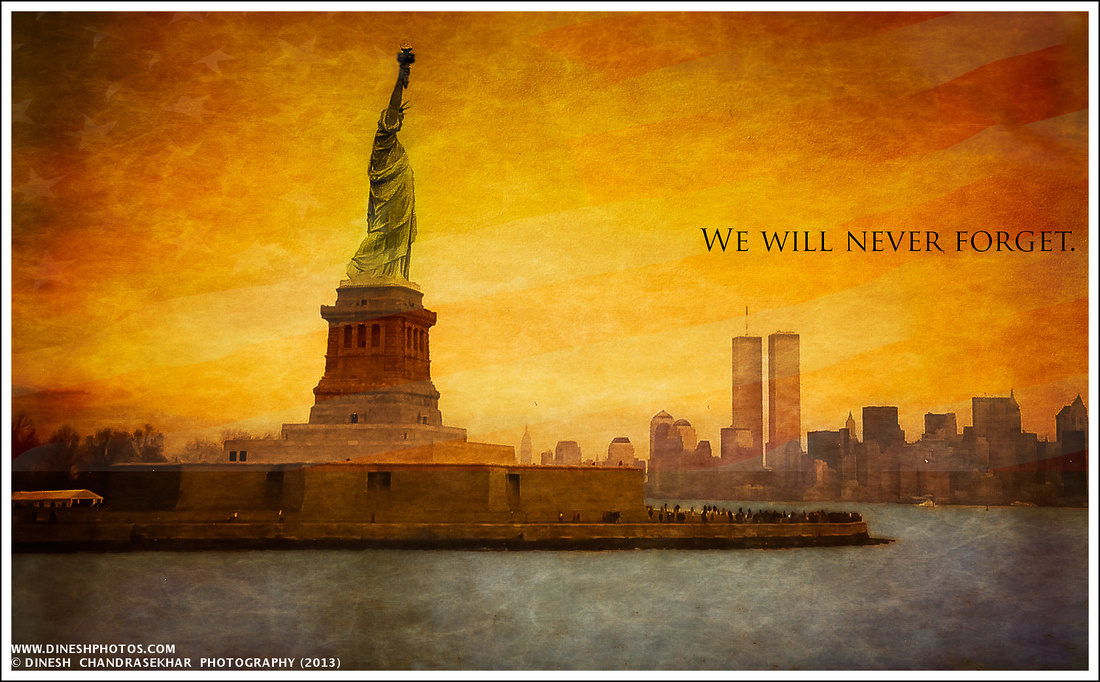 I am not saying that this is the right way to do it. I just loved the way the image transformed itself into the appropriate mood I wanted. So, I just wanted to share which tools worked well for what purposes. But, you can always do it in a different way, based on what you feel you want in your image. Until next time, vanakkam!